HVAC Fan Types – Is a Fan Just A Fan? 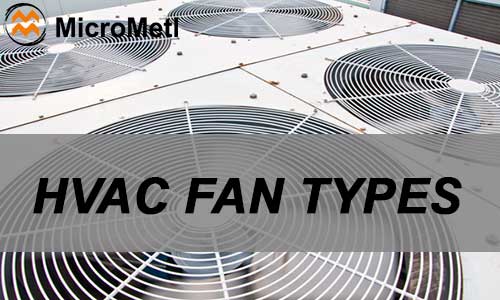 HVAC Fan Types — Is A Fan Just A Fan? – Not at all. It’s important to understand basic fan types to properly understand how to choose the best, most cost effective type for the job.

All fans are designed for the sole purpose of moving air. Most furnaces and HVAC units contain one or more fans. Different fans are used for different applications, and to fulfill certain price points.

This article is a basic overview for the purpose of simplicity.

Three basic fan types are most often encountered in the HVAC industry. The Axial Fan, the Forward Curved Centrifugal Fan, and building momentum in the industry is the Backward Inclined Fan. 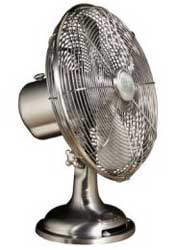 Axial fans are used in a wide variety of applications, ranging from ceiling fans, small cooling fans for electronics found in home appliances such as computers, box fans, and even used to cool the engine within your car. 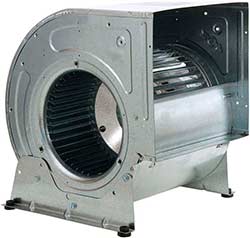 centrifugal fan contains a fan which may remind you of a squirrel exercise wheel. A centrifugal fan produces more pressure for a given air volume than axial fans. Found in leaf blowers, to inflate large inflatable structures & HVAC equipment. They are typically noisier when compared to axial fans.

Centrifugal fans are suited for application with higher air flow volumes and pressures.

The drive mechanism of the fan may be direct, belt, or variable drive.

installed. The Backward Inclined Fan is designed to handle large volumes of relatively clean air as required in heating, ventilating, and air conditioning systems, as well as many industrial air supply and exhaust applications. Centrifugal Airfoil, Backward Inclined, Backward Curved: These fans are the most efficient of the centrifugal designs. The blades may be either curved backward or straight.

The drive mechanism of the fan may be direct, belt, or variable drive.

Let’s Compare Fan Types – Where Are They Used In HVAC?

As previously stated, each fan type has a specific purpose.

Axial fans can be found positioned on top of a HVAC Rooftop or home compressor section (located outside the home). A basic HVAC system (not running a heat pump) is designed with condenser coils which remove heat from a home, or business when running the air conditioning or cooling mode. These coils have fins which require air to move through them to remove heat. These coil sections do not require a fan with great power and cost, therefore an axial fan is the best solution.

Inside the HVAC Rooftop or home system you’ll discover a centrifugal fan. These fans must overcome all the resistance of your home’s (or business’) duct-work. Therefore, an axial fan would be inadequate, causing a multitude of problems from bad air circulation to coil problems. The best solution is a centrifugal fan. They move a large quantity of air, while overcoming all the resistance, or static pressure of the duct-work, providing adequate air flow throughout your facility.

Some HVAC Rooftop units and HVAC accessories may contain a single, or series of backward inclined fan(s). HVAC Rooftop Units, and many MicroMetl Energy Recovery (ERV) units contain backward inclined type fans. Most often (particularly with MicroMetl products), you will find that a Variable Speed Drive is integrated into the motor, and both are directly built into the fan.

The integration of fan / motor / VFD requires less maintenance (no belts, pulleys or separate motors to mess with) and allows for a much smaller profile, They are great when you need to move a large air volume within a tight space.

A Power Exhaust is used to remove air from a building to prevent excessive building pressure, and is often coupled to a commercial HVAC Rooftop Unit. Depending upon the quantity of air to be exhausted, you may discover any of the three fan types discussed.

Not all fans are capable of changing speed. Most axial type fans contain a fixed speed, or multiple fixed speed motor, not to be confused with a Variable Frequency Drive (An electronic drive which can widely vary the speed of a Three Phase motor).

Most centrifugal types are couple to motors containing pulleys and belts. These pulleys can be changed, or in some cases adjusted to vary the speed of the fan. However, the pulley adjustment once changed and set will continue to operate the fan at one fixed speed until stopped and manually changed.

A multiple speed motor is designed to operate at two or more fixed speeds. Multiple speed fans work well with an axial fan in your living room encountering minimal resistance, or under circumstances where you’re certain of the airflow & precise static pressure conditions.

However, within an HVAC system, if you desire to move two specific air volumes, or CFM Of Air with a single fan, you may experience unexpected results.

Let’s say you want to move 1000 CFM of air at one speed, and 2000 CFM of air using the second speed of your motor. You adjust the pulleys to allow the fan to output 1000 CFM, and all is well. However, fans are sold and designed to move air at a specific fan speeds, and specific static pressures. Therefore, a fan will move more air running at a set speed facing the air resistance of 1 inch of static pressure, verses 1.5 inches of resistance or static pressure; running at the same speed. Your basic problem; you are unlikely to obtain the 2000 CFM at the second speed, It may be more, less, or impossible to obtain without changing blower sizes, or adding dampers to vary your static pressure!

A Variable Frequency Drive can be set to run a fan motor at any requested speed the fan is capable of handling. Therefore, hitting multiple CFM set points is easier, and more practical than utilizing a fan driven by a motor with multiple fixed speeds.

Furthermore, significant power savings (with reduced cost of operation) are possible if variable speed fan drives are used for applications that require reduced flow operation for a significant portion of the system operating life.

Total cost is a significant factor when selecting or specifying a fan and is often the deciding factor when choosing between fan types or arrangements. Fans manufacturers always accompany their fans with charts showing the required strength of motor, and air flow obtainable.