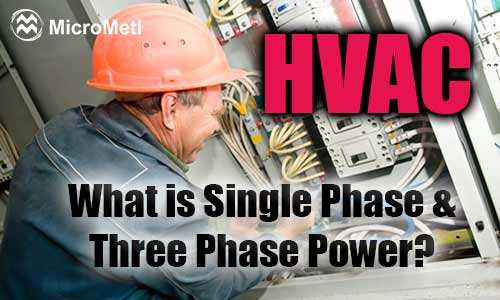 The HVAC Industry offers end-user equipment operating with either single phase, or three phase electricity. We spec it every day, but what are the differences, and are there advantages.

Allow me to use a battery for this explanation. Batteries offer DC (Direct Current), and are equipped with a fixed positive and negative terminal — called polarity (See Our Blog On “Basic Electricity Defined & Simplified” to define DC Power). The electricity stored in a battery does not change polarity. Meaning electricity flows out of the battery in one direction, and returns to the battery from the opposite direction. 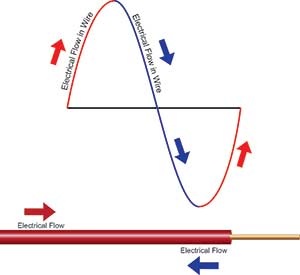 Figure 1 – Electrical Flow Through A Wire

The standard throughout North America for electrical distribution is 60 Hertz. This standard of hertz (aka frequency), explains that each second the electricity changes direction within a wire 60 times. Electricity travels one direction on the wire, and then switches to the opposite direction.

For visual purposes an electrical sine wave (Figure 1) is offered as reference. 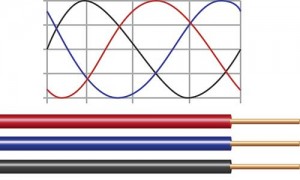 Three phase service is simply three – single phase wires which are all mathematically synchronized to switch direction at different times, and all at the same voltage – Illustrated by three separate sine waves in Figure 2.

Fun Fact...
Thomas Edison invented more than 2,000 new products, including almost everything needed for us to use electricity including switches, fuses, sockets and meters. 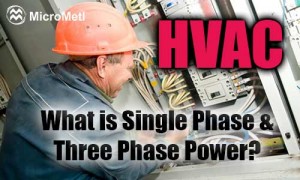 HVAC Rooftop units, ERV (Energy Recovery Units), Power Exhaust, and other HVAC equipment are full of motors. Three Phase systems are preferred because of their greater efficiency when it comes to electric motors. Additionally, Three Phase motors last longer than single phase motors, and are available in a much larger range of horsepower sizes.

Within three phase machines, controls can be smaller, lighter in weight, and more efficient than comparable single phase equipment. More power is supplied to them in the same period than can be supplied by a single phase power circuit (Three wires feed the motor verses one with single phase).

Imbalanced line voltages – As shown in Figure 2, a three phase system consists of three separate single phase lines. To be efficient, it’s important that each of the three lines all offer the same voltage, without variance. Otherwise the imbalance of voltages will reek havoc upon some system components.

How much imbalance is too much? Use the 4% rule! 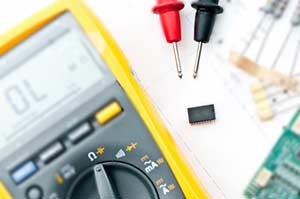 Suppose your facility is operating on 230 volt – three phase power. Therefore, each of the three lines should measure a voltage as close to 230 volts per line as possible. However, your measurements discover variances… For example the lowest voltage on a circuit is 230 volts, another measures 235 volts, and the final line measures 240 volts. Is this a significant voltage imbalance?

If the difference of the highest and lowest voltage (10) is larger than 4% of the lowest voltage (9.2), the system is providing too much of a voltage variance, and considered to be imbalanced.

The Results of an Imbalanced Three Phase Line

Electrical equipment; especially motors and their controllers will not operate reliably on unbalanced voltages. An imbalanced system may cause overheating of components, causing motors and controllers to intermittently shutdown. In addition, many solid-state motor controllers and inverters (known as Variable Frequency Drives VFD) include components sensitive to voltage imbalances.

If you discover voltage imbalances at the rooftop unit, the first place to look is not the power company. Instead, look for electrical distribution of the three phase wiring throughout the facility.

To further elaborate: To operate any single phase equipment within a three phase system, all that’s required is to redirect one wire from any of the three phase lines to the piece of equipment. As multiple lines are redirected, it’s important to evenly distribute the load across all three lines. Otherwise the single phase distribution may not be evenly balanced across the phases or lines, causing an imbalance.

In addition, look for Line Reactors placed into the system. Line Reactors are installed to oppose rapid changes in current, and can prevent over-voltage and under-voltage tripping problems.

These reactors usually have taps for adjustment, and somebody may have adjusted them, or, the imbalance they originally corrected may have shifted over time. Circuits with tapped reactors rarely stay in balance indefinitely.