Variable Frequency Drive VFD — What Is It, And Why Use It In HVAC?

Variable Frequency Drive (VFD)…
What Is It, And Why Use It In HVAC?

A Variable Frequency Drive (VFD) controls the speed of a motor, specifically a three phase motor. To better understand a VFD, let’s examine the motors they control.

Most commercial HVAC systems require powerful motors, and often operate on a three phase power (The standard method for electric power distribution systems because of its efficiency). A three phase motor is cheaper to operate than single phase motors because it uses less current (less current often results in reduced wire size and cost), especially where large motor requirements are necessary.

Most three phase motors are connected to HVAC fans and operate at a fixed speed. The motor is either coupled directly to the fan, or will operate the fan using a belt & pulleys (the combination of pulleys control the fixed speed of the fan).

Let’s assume you have an application requiring a two speed HVAC fan. Seems simple enough to install a two speed motor. However, you couldn’t possibly think simplicity would be the correct answer.

May I briefly digress; I recently completed a video which explains How To Read And Use An Air Duct Calculator.  In the video I explain the airflow issues an HVAC unit will encounter with duct-work, and other air distribution parts which comprise a HVAC system. Plenums; duct angles & reducers; curb adapters; concentrics; dampers sections and the like, all introduce resistance (static pressure), and affect the amount of air, or output of air from a HVAC unit.

That stated, let’s assume you perfectly balanced the HVAC fan airflow throughout the building at the low speed of your two speed motor.  Quickly after initiating the second fixed motor speed, you will discover the results are not as predicted. Why? Because the output of air from the fan is directly related to the static pressure (resistance) of the HVAC distribution system. The system’s static pressure will change to the increased air velocity affecting the air volume output of the fan.  If you’re getting too much air, you may be forced to introduce static pressure into your system on speed two. Should the airflow be too low, you must either change fan size or introduce inline duct fans or the like. Either way, it increases the project costs and aggravates the building owner. 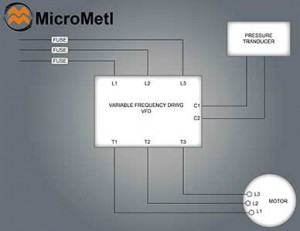 The solution is a Variable Frequency Drive (VFD). A VFD controls the speed of a three phase AC motor, while resulting in energy savings! It saves energy because the motor does not require as much current at lower speeds. Although it resembles the functionality of a multi-speed motor, it is very different.

A Variable Frequency Drive (VFD) can be set to specific speeds. This allows a motor to obtain multiple speeds, which can be adjusted or tweaked for precision. Additionally, they can be operated via controls to constantly vary the speed of a fan. An example is the MicroMetl Modulating Power Exhaust. As noted in a previous article; when connected to a pressure transducer, as building pressure varies, the pressure control will fluctuate and vary the speed of the VFD allowing the power exhaust to quickly adjust to varying pressures. A very different application is the MicroMetl Energy Recovery Units (ERV). It uses the integration of VFD’s to offer a constant air volume to a HVAC rooftop unit while monitoring changes in system static pressure from items such as dirty air filters, a dirty ERV wheel, system damper positions and the like. Therefore as the static pressure within the system changes, controls will alter the speed of the ERV fans as to maintain a consistent air volume output.

Not All Motors Are Equal

Without getting too complicated; a VFD affects the speed of a motor by changing the frequency of the power sent to a motor. A standard motor is not appropriately designed to overcome the negative effects including additional heat, audible noise, vibration, bearing problems, and insulation breakdown. A motor operating at very low speed with a VFD will cause the motor to generate heat. If you’re constantly controlling the motor at very low speeds, you should consider using a small motor.