What Is A HVAC Ton…
Simplified, Explained, And Defined! 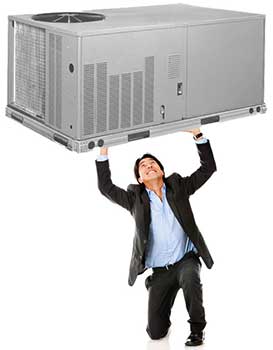 Have you ever approached a condenser coil section outside of a home or business when the fan is operating? You will discover the fan is blowing hot air. Why… because Air Conditioners (A/C) don’t produce cool air, they remove heat from a space by using refrigerant to absorb heat and transfer it outdoors.

The “ton” reference of an air conditioner’s capacity is related to heat removal, not the amount of air moved through the unit, or its actual weight.

Before electric air conditioners, homes were cooled with blocks of ice. The ice absorbed heat from the building and melted accordingly.

How Much Heat Energy Does It Take To Melt An Entire Ton Of Ice?

It takes 286,000 BTU’s (British Thermal Units) to completely melt 1-ton of ice. A BTU is the amount of heat required to raise the temperature of 1 pound of liquid water by 1 °F at a constant pressure of one atmosphere.

Depending upon the quantity of heat energy the ice encounters, a ton of ice will melt at any given time interval. I discovered an article from the American Society of Mechanical Engineers. According to the article, in 1912 the society appointed a committee which chose 24 hours as the standard time duration for engineers to calculate the energy required to completely melt the 1-ton of ice.

Now that we understand how much energy is required to melt our ton of ice over an entire day, I’ll explain how to derive the industry reference for every A/C unit on the market. Divide 286,000 (amount of energy to melt a ton of ice), by 24 (hours in a day), the result is 11,917 BTU’s of energy per hour to melt the ton of ice.

Are Heating and Furnaces Measured In Tons Similar To Air Conditioners?

Heating units are not measured in tons as A/C units. Heating capacity is referred to in 1000`s of BTU output per hour of operation.

Heating units often offer two sets of BTU ratings. These numbers offer the input, and output BTU rating allowing us to easily understand the efficiency of any heater or furnace.

Below are examples of how the BTU equivalent of a unit is often portrayed and incorporated into a model number;

Other manufacturers incorporate the tonnage directly into their unit number. However, they usually don’t include the precise tonnage. My thought; because of the 2.5, 7.5 and 12.5 ton units which if expressed with whole numbers would cause confusion. Most all manufacturers when referencing tonnage round up.