What Is A Multiple Speed Indoor HVAC Fan And Why Is It Needed?

What Is A Multiple Speed HVAC Fan…
Why Is It Needed? 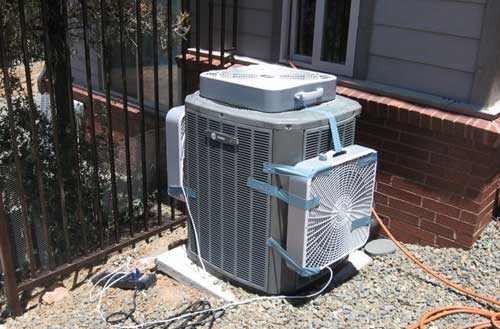 Multiple Speed HVAC fans… No, not like the above graphic of a condenser unit in desperate need to remove heat from the coils… I’m talking about an HVAC fan used to supply air into a building.

Commercial buildings and applications often requires the indoor fan to run continuously during occupied periods. Therefore, the fan’s motor is consuming maximum power for long periods of time, while running at a constant or fixed speed. Multiple speed fans allow speed reduction when the building is occupied, while below peak load requirements for cooling or ventilation.

It is said a typical building experiences peak load conditions only 3 percent of the time. Therefore, the average building is running under partial load conditions a whopping 97 percent! The Department of Energy (DOE), has begun to use a new standard of measurement called Integrated Energy Efficiency Ratio (IEER). The IEER standard measures the energy efficiency of a building during partial load — the 97 percent majority of the time! The multiple speed indoor fan codes & prescriptions are designed to improve IEER significantly!

The VFD can be programmed to obtain specific motor speed(s). This is highly advantageous when running with multiple stage compressors. The airflow of the fan can be preset to deliver precision airflow according to each compressor stage, and during Economizer Free Cooling.

Multiple speed indoor fans are becoming more prevalent due to an increasing quest for energy savings, and code requirements such as the ASHREA 90.1 & California Title 24.

Matching the Economizer and Power Exhaust

When the speed of the fan changes, it is necessary for the economizer and power exhaust to proportionally react & adjust by allowing more, or less outside air into the building. This can be problematic with a standard fixed speed Power Exhaust. In a previous article I explained how a Power Exhaust is designed to remove the air from the building, while proportionally allowing outside air to enter the building preventing pressurization issues. If the Power Exhaust has been proportionately balanced to the indoor fan to remove air during lower speeds, all is well until fan speed is changed.

It is recommended that a Modulating Economizer and Power Exhaust are incorporated into your multiple fan environment. If the Power Exhaust does not react proportionally to the output of the HVAC indoor fan, pressurization issues will occur. The MicroMetl Modulating Power Exhaust is designed to react to the pressure of the building via a pressure transducer and PID (Proportional, Integral, Derivative) loop designed into the programming of the VFD to prevent hysteresis. Hysteresis occurs when a VFD fails to stabilize. As an Example: When building pressure drops, the motor/fan slows. Without a PID loop, the fan will slow too much, begin to speed up, over-shoot the mark and slow down again. This constant fluctuation between fast and slow motor/fan speed in an attempt to obtain the necessary speed and is called hysteresis. All MicroMetl Modulating Power Exhaust are integrated with PID programming… so should yours!

The average modulating economizer is designed to react to Enthalpy or Dry Bulb controls, not the inclusion of multiple speed fans. The JADE controller is designed to complement an economizer, and its functionality will meet new prescriptive and mandatory code requirements. Due to the in-depth explanation required for JADE controllers, I will address them at a later date. Please monitor The MicroMetl Blog for the forth-coming in-depth article on The JADE Controller!