What Is An Economizer – AKA Mixing Box? Economizers Class 101!

Saving Money and Lowering the Cooling Load is really what an economizer does. Webster defines economize as to “reduce expenses.” In its most simplistic form, an economizer is nothing more than a device which introduces fresh outside air into a building space in a controlled manner. Under the proper conditions, the use of an economizer can save energy, and comply with local codes. Building codes often require the introduction of a specific amount of fresh outside air to match both the occupancy level of a building as well as type of building.

The Basic Parts of An Economizer

An indoor air handler, or packaged Roof Top Unit (RTU) is notified by a thermostat to cool a building. If an economizer is present, and the OA heat energy is better than the indoor set-point conditions, the OA damper will open to allow the outside air to enter the building. This is referred to as free cooling because the condensing unit compressor is not required to run (or at least not as often) to cool the space. Other than a unit fan or blower, no energy is consumed, and therefore minimal cost is incurred to cool the building. Anytime the conditions outdoors is better than the indoors (cooler and/or drier), “Free Cooling” is available. Only when the outdoor temperature drops to 56°F or lower and the indoor heat is removed do you get True Free Cooling.

If the OA temperature is not cool enough, or in some cases a high level of humidity is present, the economizer will not open and the cooling will have to be achieved mechanically.

Free Cooling is what most people think of when you mention Economizers. However, true free cooling doesn’t occur until after the outdoor temperature drops below about 56°F. Anything above that may not provide 100% cooling. Actually, to truly get 100% cooling, you cannot just add cold air to a room. The warm air has to be removed. Since a typical Barometric Relief damper only relieves approximately 25% of the air introduced into a building, an economizer alone cannot provide 100% cooling.

Notice the Mixed Air Sensor and the Discharge Air Sensor depicted in the simplistic graphic above. It displays how the sensors could be utilized. You would never use both Mixed Air Sensor, or Discharge Air Sensor at the same time. However, sometimes a Mixed Air Sensor cannot be properly installed because it will become too influenced by one source of air over the other. Therefore, a Discharge Sensor would be used to ensure you are monitoring an accurate reading of the air stream mixtures. When it comes to economizer sensors, the terms Mixed Air, Discharge Air, and Supply Air are often interchangeable. The important thing to remember is put the sensor in the location that gets the best mixed air. 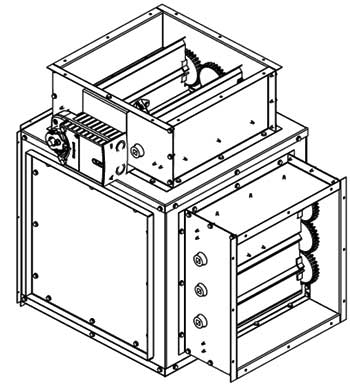 A mixing box is similar to an Economizer, which fulfills the exact same purpose, except a typical Mixing Box does not incorporate a Relief Damper. Economizers are often installed directly into a rooftop unit. Mixing Boxes are installed directly into duct work, or affixed to a residential style furnace, or air handler. Unlike most economizers which are designed to fit inside a rooftop unit, a mixing box is often a self-contained box which requires duct work to be directly attached to the Outside Air & Return Air Dampers.

Significant energy savings can be achieved with the proper application of economizers. The key to realizing the savings though is proper set up. This is only a summary of an economizer and all its applications. We’ll cover more of this along with associated accessories like Power Exhaust, CO2, and Energy Recovery Ventilation Units (ERV)  in later blogs.