What Is A HVAC Concentric Airflow Diffuser System?

What Is A HVAC Concentric Airflow Diffuser System — Heating, ventilation and air-conditioning units often utilize air duct systems throughout homes and commercial buildings. A Concentric Diffuser system is designed to eliminate the need for traditional duct-work by providing a single air diffuser to supply & return air to each rooftop. A Concentric Diffuser provides conditioned air from a HVAC rooftop unit to a space, while returning air back to the rooftop unit through the same diffuser. Designed to deliver air into an open space, or just below the ceiling of an occupied space using a very short distance.

Concentric Systems are comprised of many components. Instead of explaining the components in their assembled order, I’ll jump to the Hard or Flex Type connections. They dictate the construction of all the parts that make up a concentric diffuser system.

Hard & Flex Duct Connections — Two primary concentric diffuser systems dominate the market. They are referred to as Hard or Flexible Duct systems. There are many reasons why you may choose hard or flex connections. Perhaps an obstruction requiring flexible duct, esthetics, performance, or ease of installation. A Hard Duct section (Figure #1) contains two separate duct sections. The hard duct sections can be side-by-side, or duct-in-duct. These pieces are constructed of sheet metal, shipped flat to be field assembled, and field installed. In the duct-in-duct design, the outer wall directs supply air from the rooftop unit down into a diffuser, the inside section collects air from a space via the diffuser, returning it to the HVAC unit. Side-by-Side hard duct uses separate, isolated hard duct sections, one for the supply air, and one for the return air. Flexible Duct (Figure #2) uses two or more individual pieces of short flexible duct to direct the supply air from the rooftop unit to the diffuser and return air from the diffuser to the rooftop unit. Roof Curb The HVAC Curb is normally purchased separately. Often the curb’s supports and deck pans (below the rooftop compressor) must be temporarily, or permanently removed for components of the concentric diffuser system to be installed. Transition Adapter Sections or Adapter Inserts. These sheet metal sections install inside a roof curb and direct the HVAC supply air into the hard or flexible duct sections. A Transition Adapter is necessary when using a hard duct system (Figure #1). Adapter inserts (Figure #2) containing round, or ob-round openings are necessary when using flex duct connections. Transition sections are almost always shipped knockdown and require field assembly. Drop Type & Flush Mount Diffusers The Diffuser itself is the means of air distribution within your space. Regardless of the feed type from your rooftop unit (flexible or hard duct), two basic types of air diffusers are most common – Drop Type & Flush Mount. 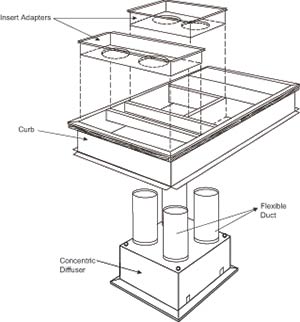 The Drop Type Diffuser (Figure #3) is designed to disperse the supply air from its perimeter. Often the blades surrounding the perimeter adjust both vertically and horizontally to allow optimal control of supply air direction and velocity. It allows a further disbursement of air than obtainable from a flush mount diffuser. The air is returned through the center of the diffuser back to the rooftop unit. Due to the design of the Drop Type Diffuser, the return air is less likely to generate air noise due to the lower face velocity, and larger return air section used to draw air back into the diffuser. Usually found in warehouses and department stores where drop ceilings do not exist. If used in conjunction with a drop ceiling, it will extend several inches below the ceiling surface.

Flush Mount Diffuser (Figure #4) uses the outer portion of the Flush Mount section for supply air distribution. All blades are fixed and produce a slightly higher rate of static pressure than the drop type due to less available supply & return area. When comparing velocity between the two, the Flush Mount does not throw air as far as Drop Type Diffusers. Most often used in conjunction with a drop ceiling. Designed to lay flush to a ceiling’s surface. 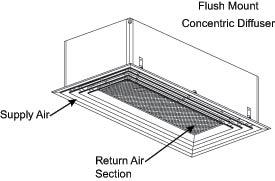 Final Thought MicroMetl Diffusers are specifically designed to disperse air from the outside perimeter in a 360-degree radius with equal velocity. Diffusers are sold according to the CFM, or Tonnage of your rooftop unit. If you lack experience, choosing the wrong Concentric Diffuser components will prove to be costly. Please contact our MicroMetl Customer Service Department with all your diffuser questions and needs.