What Is HVAC SEER & EER? 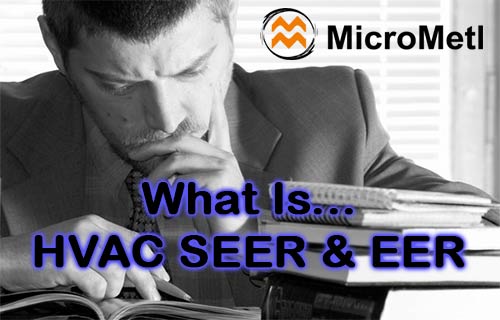 Prior to 1975, there was no universal standard of measurement for rating HVAC energy efficiency. So the Air Conditioning & Refrigeration Institute (ARI) introduced The Energy Efficiency Ratio (EER) for the purpose of rating the cooling efficiency of HVAC units.

This steady state efficiency was similar to the steady state thermal efficiency of the gas furnaces and boilers currently in use at the time, i.e. cubic feet of gas consumed in BTU/H verses BTU/H heat output.

While this sounds logical, no seasonality was taken into consideration for either the EER, or gas furnace thermal efficiency. The climate zones across the U.S. vary, as do seasonal conditions from one zone to another. And ON/OFF cycles with residual heat loss/gain that went with it were never a consideration. For example, Florida and Arizona have different summer conditions, which affect the performance and resulting cooling energy savings for the user of the HVAC unit. This means the seasonal conditions affect the value, and must be weighed when interpreting an HVAC unit’s EER rating.

Thus, in 1978 the U.S. Congress passed a law requiring the labeling of certain “appliances” (HVAC units under 65,000 BTU/H/cooling) with an efficiency rating which took into consideration how certain variables (seasonality) affect cooling BTU/H output, watts input, and an average cost of operation for the cooling side of a residential HVAC unit. Additionally, the gas furnace and boiler rating also changed which brought us the Annual Fuel Utilization Efficiency (AFUE)… but that will have to wait for another blog.

The new rating, Seasonal Energy Efficiency Ratio (SEER), was created as an alternative to the original EER, and to better approximate the actual cooling cost of operation of an “appliance” based on the installed climate zone. SEER is a different efficiency rating than EER, and is based on residential air conditioner usage patterns. SEER includes a rating at a different temperature than EER and also includes performances such as conditions of cycling (off/on), thus includes cycling losses.

Seasonal Energy Efficiency Ratio (SEER) – This is a measure of equipment energy efficiency over the cooling season. It represents the total cooling of a central air conditioner or heat pump (in Btu) during the normal cooling season as compared to the total electric energy input (in watt-hours) consumed during the same period. SEER is based on tests performed in accordance with AHRI 210/240

EER and SEER are two ways to determine the cost of operation of an HVAC unit.

The most significant product change regarding the new regulations involves all split-system heat pumps. All regions will move from Thirteen (13) SEER and 7.7 Heating Seasonal Performance Factor (HSPF) to the new national heat pump efficiency minimum of 14 SEER and 8.2 HSPF.

Heating Seasonal Performance Factor (HSPF) – This is a measure of a heat pump’s energy efficiency over one heating season. It represents the total heating output of a heat pump (including supplementary electric heat) during the normal heating season (in Btu) as compared to the total electricity consumed (in watt-hours) during the same period. HSPF is based on tests performed in accordance with AHRI 210/240

The higher the SEER, or EER, the greater the BTU/H cooling delivered for the watts of electricity consumed. If you could compare it to an automobile’s Miles Per Gallon (MPG), it’s better Miles Per Gallon, so to speak. The important difference; EER is at a single rating point, and more represents peak load rating, while SEER is a seasonal rating most typifying average residential usage in the United States. Back to the automobile analogy — EER is more like the MPG rating for highway driving, while SEER similarly compares to MPG city driving.

As stated earlier in this article, the SEER rating is based on residential A/C usage patterns. For this reason other measurements are emerging. Not that we need any additional acronyms… However, you may have already seen some, such as Combined Efficiency Factor (CEF), Integrated Energy Efficiency Ratio (IEER), Simultaneous Cooling & Heating Efficiency (SCHE), and Sensible Coefficient Of Performance (SCOP), which have been developed by Air Conditioning, Heating and Refrigeration Institute (AHRI), formerly known as ARI, the U.S. Department of Energy (DOE), U.S. Environmental Protection Agency (EPA), and other groups to address commercial A/C usage patterns.

Integrated Energy Efficiency Ratio (IEER) – A calculation which evaluates the efficiency of a rooftop air conditioning or heat pump system on a seasonal basis.

Simultaneous Cooling & Heating Efficiency (SCHE) – Defined by AHRI Standard 1230 as the ratio of the total capacity of the system (heating and cooling capacity) to the effective power when operating in heat recovery mode.

Sensible Coefficient Of Performance (SCOP) – Defined by ASHRAE as; A ratio calculated by dividing the net sensible cooling capacity in watts by the total power input in watts (excluding re-heaters and humidifiers) at conditions defined in ASHRAE Standard 127

These ratings are used when ERVs and A/C units are combined for a single source of ventilation and cooling system, installation of Variable Refrigerant Flow (VRF) systems, and Computer Room Data Center Cooling, to name a few. But later blogs will have to address these.

Some information posted here was obtained from an article from the Modular Building Institute – October 2003.