What Is An Ultra Low Leak Economizer? 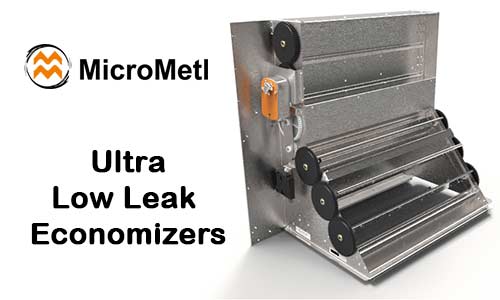 The Ultra Low Leak Economizer… So what’s the big deal?

I had recently written an article about the JADE W7220 Economizer Controller explaining that the call for a new generation of controllers was due to a large number of economizer failures discovered in the field. An economizer damper failure is a factor which would alarm the new generation Title 24 compliant controllers. However, leaky return and/or outside air dampers would not. 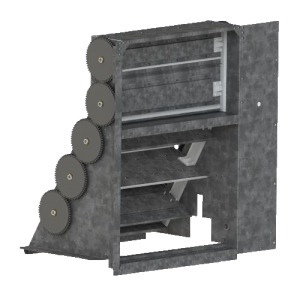 An economizer employs dampers to deliberately separate air streams of different temperatures. When a damper does not close properly, or contains gaps, and leaks air instead of separating it; the temperature difference, and therefore the energy benefit is degraded. This is especially noticeable during extreme temperature differentials. If the outside temperature is -20 F during unoccupied mode, the last thing you want is a leaky economizer damper introducing frigid air into your HVAC system. Inversely, when hot air is leaked into the system, unnecessary cooling energy is wasted.

If you are in “Free Cooling Mode,” and your return air damper is leaking large quantities of air, you’re defeating the energy savings of an economizer. The return air mixing with the outside air will increase the mixed air temperature to make the “Free Cooling” stage partially ineffective, or cause compressor staging to unnecessarily or prematurely activate.

Getting Up To Code

The Prescriptive piece of Section 140.4 states you’re allowed no more than ten CFM (Cubic Feet Per Minute) of air leakage per square foot through your return damper, and/or outside air damper at one inch of water column of pressure (Static Pressure), and includes a life cycle test (60,000 life cycle test).  Additionally, it requires a five year warranty on the economizer among other requirements. 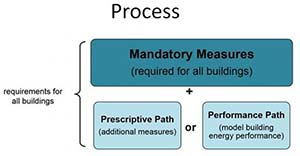 Understanding the Difference Between Mandatory, Prescriptive and Performance Title 24 Requirements!

Ultra Low Leak Dampers are not mandatory, only prescriptive. Defining Mandatory verses Prescriptive verses Performance is a bit confusing, I’ll do my best to explain.

Prescriptive requirements are a choice. However, the word choice here is a bit deceiving. Along with the mandatory requirements, you must complete all the prescriptive elements, including Ultra Low Leak Dampers, unless you choose an alternative path to compliance called the Performance Method.

The Performance Method is more of an end result approach. As an example: hypothetically speaking, if ten prescriptive items are on the Title 24 list for a project, the Prescriptive approach would be to complete each and every one in accordance to the code. However, that may prove to be the more expensive approach. The alternative is the Performance Title 24 method. This approach requires you to prove an energy goal has been reached to fulfill the Title 24 requirements for the job, regardless of how many Prescriptive tasks were accomplished. Therefore, if you can prove a building is in compliance accomplishing only 8 of the 10 hypothetical tasks, you still receive certification.

The use of Energy Commission-approved computer methods are used in the Performance Title 24 method. Detailed accounting of energy trade-offs between Prescriptive requirements are possible with this compliance approach. However, this approach will require more effort to meet the certification versus using a product which simply meets both mandatory and prescriptive requirements, such as the JADE Controlled Low Leak Economizer.

The energy budget for a proposed building is determined by applying the mandatory AND prescriptive requirements. The energy budget is the sum of the TDV (Time Dependent Valuation – method for valuing energy in the performance approach) of energy computed by Compliance Software certified for this use by the Title 24 Commission.

To summarize: Here’s a brief scenario describing how the three methods could interact on a project… You want to comply with Title 24. Title 24 offers a list containing a section of mandatory items, and section of prescriptive items. You have no choice but to complete all the mandatory items on the list.

Unlike most economizers designed to fit inside a rooftop unit, a Mixing Box is a self-contained box which requires duct work to be directly attached to the Outside Air & Return Air Dampers. So don’t think mixing boxes are exempt. Although limited to specific models, MicroMetl is supporting mixing boxes with Ultra Low Leak Dampers.

Forget The Code – It’s All About The Savings

Economizers provide huge energy savings, and the Ultra Low Leak Economizer assures the economizer will perform up to its calculated expectations. Economizers provide free cooling when outdoor air conditions are suitable. This saves on mechanical cooling energy costs. The control system is very important to maximize energy savings. Finally, Ultra Low Leak economizer dampers can be provided with a plug and play demand control ventilation system, only heating, or cooling as much outside air as needed for the actual use of the space.