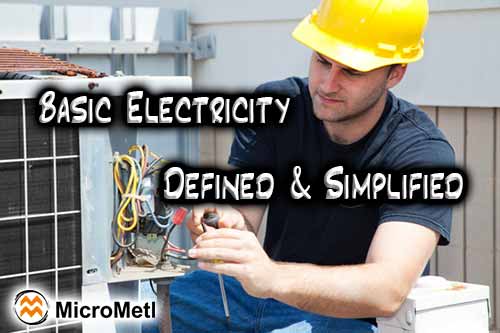 Most people don’t care, nor want to understand electricity. However, those of us in the HVAC industry are faced with the complexity of electrical jargon whether we like it or not. This article is designed to explain the jargon, without attempting to make you into the next Thomas Edison. 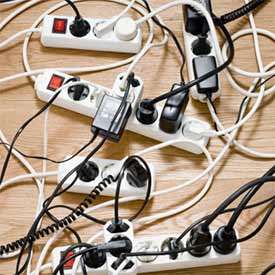 The egg-head definition is… Ohm’s law states that the current through a conductor between two points is directly proportional to the potential difference across the two points. Introducing the constant of proportionality, the resistance, one arrives at the usual mathematical equation that describes this relationship.

I studied electrical and don’t understand this description!

For the purposes of this article, there’s no need to understand the mathematics behind Ohm’s Law, only the definition of three electrical terms which form Ohm’s Law.

What is Voltage, Current & Resistance (The Basis of Ohm’s Law)?

The best way to understand voltage, current, and resistance is to compare them to the flow of water through a hose…

Voltage is…  The push or force of the water is equal to the force or push of the actual electricity, measured in volts, or voltage. 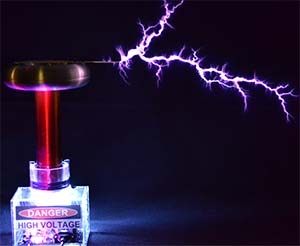 Voltage itself is not a killer. It is the combination of amperage & voltage which can result in harm. A Tesla Coil is a great example of high voltage with a low-level of current. A Tesla Coil generates very high voltages (push); as much as millions of volts. If constructed properly a small Tesla Coil generates minimal current (volume of actual electricity), referred to as milliamps — that is one thousandth of an amp.

Resistance is… defined as a material’s ability to resist the flow of current. Compare it to a water valve. The more you open a water value, the less resistance you apply to the water allowing a greater volume of water to flow.

Resistance – Most homes are equipped with outlets which support 115 volt products. Have you ever plugged in of a lamp after the family pet chewed the wires causing them to contact each other? The result; sparks and a blown fuse. Why? Because the bare wires touching each offer no resistance to the electricity. If a bare wire connected to the earth was placed into the electrical socket, the full wrath (the maximum current allowable by the fuse or circuit breaker) of current is released.

On the other hand, you are plugging in a lamp while touching one of the prongs while wearing thick rubber sole shoes, you will get shocked, but you won’t blow the circuit and create sparks… Why? Because your body, along with the material of your shoes only allow a portion of the current to be released. However, standing bare foot in a puddle of water could result in a fatal mishap, because the resistance is far less.

Arcing – The result of high voltage is obvious when watching a Tesla Coil. Air, like your body offers resistance. If the voltage is high enough, and a source to ground is too close, electricity will jump from the source to the ground. The higher the voltage, the greater potential for arcing.

You’re walking across the carpet and reach for the doorknob… ZAP! What happened… The friction between your feet and carpet produces a large buildup of negative electric charge on your finger producing an electric voltage, between your body and the doorknob — ranging from 1,000 to 50,000 volts.

AC/DC – Yes it is a band, an electrical term, and important to understanding electricity types.

DC stands for Direct Current. Batteries offer DC current. DC electricity is described as a steady stream of electric current traveling in one direction only. 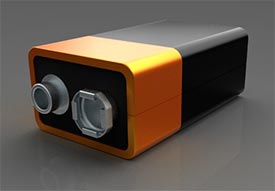 Direct current supplies such as batteries used in your remote control or computer mouse will not typically harm you due to your bodies high resistance.

A side note of advice; A standard 9-Volt battery is very dangerous when thrown loose in the junk drawer. A single coin or paper clip touching the two terminals will remove resistance (short-circuit the battery) and could burn your house down.

An additional warning about DC current – The human muscles will involuntarily contract when in contact with current. Direct Current (DC) is more likely to cause muscle contraction medically described as “Muscle Tetanus” than Alternating Current (AC).

Therefore grab an exposed wire carrying high DC current, your hand will tighten around the wire, thereby locking your grip on a deadly, or potentially deadly wire — not a good thing.

AC is Alternating Current. AC current is further defined by frequency. Most US households run on 115 volt 60 Hz. 60 Hz. is the hertz or frequency. The electricity actually shifts direction (unlike DC current) within the wire 60 times each second (50Hz or 50 times per second Europe). AC current is not only safer for humans allow us to recoil from an electrical shock without our hand contracting, but allows electricity to travel greater distances with more efficiency.

When comparing AC to DC you should note that 115 volt (AC) is very different from 115 volt (DC). Due to the differences noted above you might survive contact with AC but you will not with DC. Additionally, AC’s alternating nature has a greater tendency to throw the heart’s pacemaker neurons into a condition of fibrillation, whereas DC tends to just make the heart stand still. 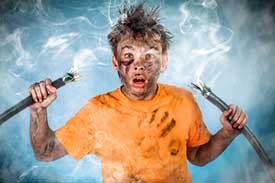 Ground  – A ground is a direct electrical connection to the earth. Electricity will take the path of least resistance. Therefore any path to the earth is always the least path of resistance.

For safety purposes, all parts which make up a HVAC unit should be wired to ground. Why? If an inside wire were to come loose and contact the outside metal shell of a HVAC unit, a properly grounded unit would throw a breaker or blow a fuse.

Let’s look at improper grounding with a hypothetical example. Let’s assume someone was working on a HVAC unit and accidentally cut the insulation of a wire, exposing the inside copper wire. Now let’s further assume the exposed wire contacts a piece of metal, which was set upon rubber isolators to reduce noise and was not properly grounded. The tech completes his work and restores power. That bare wire touching metal will work perfectly and offer no sign of danger. The piece of metal has become part of a working circuit. Depending on the voltage and current on the exposed wire, you are in danger, but would not be aware of the danger until the electrical shock occurs. If the metal part were grounded, it would have immediately shorted the circuit to ground, blowing fuses or safety circuit breakers.