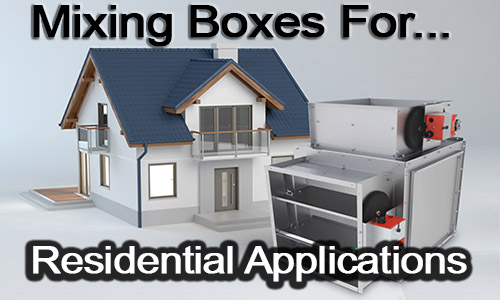 Many articles have been written about Night Air Cooling — AKA “Free Cooling.” Those articles explain how turning off the Air Conditioner (A/C), opening windows, or turning on a whole house fan at night can lower your energy bills… Have You Considered A Mixing Box? A Mixing Box offers the security of having your windows & doors closed and secured at night, yet provides “Free Outdoor Air Cooling.”

The “Flywheel Effect” Causes Your A/C To Run At Night

The typical residential A/C system is not sized to be turned off until peak heat hours of the day. It is not sized to handle the accumulated heat in the home all at once, in addition to the absorbed heat in the walls, ceilings, and doors, etc. A typical residential A/C is designed to manage heat as it is introduced. So even though the A/C is contending with the accumulated and absorbed heat during the day, heat continues to radiate back into the building throughout the evening hours, which is known as the Flywheel Effect. This Flywheel Effect, along with the fact that systems are designed to run 24/7 operation, smaller units are chosen. Because smaller units are chosen to deal with the Flywheel Effect, the result causes the A/C to run at night when it is cooler outside.

Open Windows At Night Is Not The Solution

Logic would dictate the usage of a larger home A/C unit to handle the load, but that creates different concerns. If larger units were chosen for those peak heat hours of the day, you would have the ability to combat & reduce heat built-up. So what’s the downside… Firstly, the upfront cost of a larger unit. Secondly, the increased energy costs to operate a larger unit. Lastly, this thing called Comfort.

Comfort is affected because the larger unit will not provide the necessary control of indoor humidity. When the indoor cooling temperature is controlled very quickly, it causes “Short Cycling.” When Short Cycling occurs the system does not run long enough to remove the moisture (humidity) in the air. These short cycles will lower the temperature, but the high humidity will leave you uncomfortable. The usual response to this discomfort is to further lower the temperature, equating to higher power bills. So instead of being comfortably cool, you feel damp and cold.

How Do You Reduce Operating Costs, Keep Your Home Secure, All While Leaving Our Thermostat Set To Maintain Our Homes At A Comfortable Temperature? Simple – A Mixing Box!

Several years ago – actually, decades ago – a study was done at the University of Illinois to determine the cooling effects of night air while evaluating regular cooling performance in the residence.

Each evening, at about 9:00 pm, if the outdoor temperature dropped to 75°F or lower, (equal to the indoor thermostat setpoint) the doors and windows of the house were opened and the Air Conditioning (A/C) was turned off. The house remained open through the night until around 5:30 am the next morning, at which time the A/C was turned back on. Temperatures, humidity levels, and A/C operating times for these days were compared to similar days when a full 24-hours of A/C was maintained.

Based on a comparison of twenty-two days of testing, the A/C unit on average operated four hours less each day when windows & doors were opened to benefit from the cool night air temperatures. So, if the compressor operated normally for 12 (accumulated) hours during a closed up 24 hour period, it would only be on about 8 (accumulated) hours during that same 24 hour period utilizing night air cooling.

It is difficult to place a dollars-and-cents saving on the value of night-air cooling since there are so many other factors – i.e. region, maintained temperature, home insulation, A/C efficiency, etc. However, based on this test, a 40% to 72% reduction in operating costs is possible.

Opening windows and doors is a lot less expensive than purchasing and installing a Mixing Box, but opening windows and doors also allow pollen, dust, and dirt to enter the home. Not to mention making your home vulnerable to break-ins. It’s also a money saver while you’re away during the day on those cool spring and fall days. The system will automatically bring in outdoor air instead of energizing the A/C.

So utilize night air cooling through the use of the existing air distribution system by adding a Mixing Box. A Mixing Box with the necessary controls will only bring controlled, filtered outdoor air into the home. It eliminates the need to open windows and doors, and turning the A/C on and off at the appropriate times. And since the windows and doors are closed, home security is maintained.