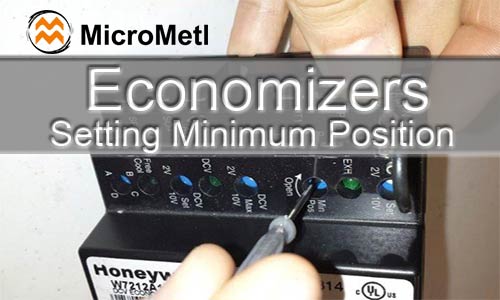 What is, And How To Determine Economizer Minimum Position

Economizer instructions explain how to set, and adjust the minimum open position for outside air dampers via a controller. However, they don’t tell us where to physically position the damper blades as to achieve a specific CFM of fresh outside air. Why? Let me explain!

For a better understanding of economizers — What Is An Economizer – AKA Mixing Box? Economizers Class 101!!

ASHRAE provides standards which allow us to calculate the minimal quantity of fresh air an economizer must introduce into a building under “Occupied” conditions. During any segment of a day designated as “Unoccupied,” you are permitted to completely close an economizer’s outside air damper blades, preventing outside air from entering into a building (This does not apply under Free Cooling Conditions). Closing the damper prevents outside air from entering the Rooftop Unit (RTU) under less than favorable outside air conditions, reducing the amount of time the RTU is operational, saving energy!

Minimum Position — Too Much & Too Little

Let’s assume you run the numbers against ASHRAE Standard 62.1, and determine that a 5,000 CFM (12.5 Ton Unit – See “HVAC Tonnage Simplified, Explained, And Defined!” to better understand the conversion)  RTU requires 20% (1000 CFM) of outside fresh air when a building is occupied. Therefore, you must set the minimum position of your outside air economizer dampers to allow precisely 1000 CFM of fresh air.

Under conditions which “Free Cooling” is not a factor, allowing too much outside air into the building will cause the rooftop unit to work harder than necessary – increasing energy costs. Too little air and you risk the general health and well-being of the occupants.

MicroMetl recently visited the site of a large car dealership. The occupants were complaining of high humidity within the building. After further investigation we discovered all the economizers were never set to minimum position; they were all 100% closed. So why would this affect humidity inside the building?

Each economizer was using a single enthalpy sensor to measure the outside air, and not a differential enthalpy configuration which would have detected the high indoor humidity.

The RTU’s were running for very short intervals of time because they were not receiving a mixture of outside air. Running long enough to achieve the desired indoor temperature set by the thermostat, but not long enough to remove the humidity which entered directly into the showroom from foot traffic and automobiles entering and leaving. This is a condition called short-cycling. Once all the economizer’s outside air dampers were properly set to minimum position, the complaining and humidity dissipated.

How Do You Determine The Damper Settings For Minimum Open Position?

One of the biggest misconceptions for setting damper blades to minimum open position is to assume there’s a linear relationship between fully open blades, and fully closed. As an example: Assuming the blades move 90 degrees to fully open, some field technicians will eyeball minimum position to be approximately 18 degree (20% of 90 Degree).  This could not be further from reality. Using our previous example, 20% open allows a significantly higher quantity of air beyond 1000 CFM into the space. In most cases, the quantity of air entering the RTU is approximately the same whether the dampers are 50%, or 100% open. The only difference between the two positions is more or less air turbulence.

The Problem With Older Economizers

Some older economizer dampers allow through as much as 5% to 10% of outside air when completely closed due to leakage. Therefore, you could be introducing 500 CFM (based upon previous example) of outside air when your assumption is zero CFM. This is not only problematic when attempting to guess-estimate minimal outside airflow, but adds additional load to the RTU during “Unoccupied” conditions when free cooling is not a factor.

Title 24 To The Rescue

The genesis of Title 24 came about for numerous reasons. One specific reason is the vast amount of economizers discovered in the field to have either malfunctioned, or was disconnected. Many economizers were found inoperative in their minimum position, in other cases disconnected, and screwed completely closed. Title 24 introduced fault detection to assure that economizers are easier to monitor and obvious to an inspector or field tech when they are disconnected or inoperative.

Additionally, Title 24 set standards to nearly eliminate air leakage when an economizer’s dampers are set to closed. Therefore, when utilizing A Title 24 Compliant Ultra Low-Leak Economizer, closed can be calculated as very near to zero CFM.

I didn’t intend to offer a misleading title, but each economizer setup is unique depending upon the required CFM, total Static Pressure, sensors, and outside air requirements. My intention is to make you cognizant of the importance to precisely dial in the proper outside air CFM when setting minimum position. An economizer is often mandated to save energy and offer a Return Of Investment (ROI) on the cost of the economizer, controls and sensors. Therefore, to properly calculate and obtain minimum position is a key first step to accomplishing the energy savings and ROI goal!

The margin of error for estimating an economizer’s minimum position is great. Furthermore, the price for said error is costly. As HVAC professionals we owe it to the end users to provide and maintain equipment as promised. I always recommend the implementation of air flow measuring equipment when setting minimum position!